I just participated in a Zoom thingy. It was with my high school class.

37 years ago I graduated from an all-girls high school in New Jersey. Kent Place School.

There is some debate about how many young ladies were in our class, but it was somewhere in the 40’s. We had more than half of us together today which was very impressive. Our numbers even included our Japanese exchange student at 3 am her time.

Many of those gals have kept in touch, seen each other, sent their kids to Kent Place. They went to each other’s weddings. They know each other’s spouses. Not everyone, but many.

And, thanks to social media, we all know some bits about each other’s lives.

But me? Nope. I’m not much of a keeper-in-toucher. I’ve moved around a lot. I don’t lose feelings for those friends from each chapter of my past, but I just don’t do a very good job of showing it.

Mostly because when I am at home, alone, the time to reach out, I’d rather shut off from people. Picking up the phone is really painful so I just don’t do it.

Except I call my mom.

High School was hard for me. I wouldn’t have said it then, but in hindsight, all I remember are the rough times, the times when I felt so incredibly insecure. I had a group of gals that I hung out with (the majority of whom were on today’s call) and I certainly had fun with them, but I never ever felt like I was “in.”

My best friend, L was part of the crowd and so I always assumed that that’s why I was included. I remember thinking one time that I always got invited “for entertainment purposes.”

Immediately after college, I left New Jersey and haven’t looked back once. My brother left. My parents left. It has never crossed my mind to move back to the east coast.

Except to take care of my mother in Florida. And see, I haven’t done that. Couldn’t bear to leave the grandeur of the West.

So I went into the conversation this morning with a little trepidation. A little angst. I sat outside on my deck, in the sun, and painted my nails as each of these forgotten yet so familiar (and beloved) faces popped up on the screen one after another.

With that many people on there, what made the most sense was for each of us to “give an update” on our lives which was basically a 2-minute synopsis of what has happened in your world since May of 1983.

One after another “I’ve been married for 27 years. I live in (___east coast___), My oldest is graduating from Smith (or Middlebury, or Tufts…), I’m still (an attorney, running a publishing house…)

Then one, who just moved to California said, “I don’t like it. It’s not New Jersey.”

And everyone nodded their heads in agreement.

Except for the one in Japan, and the one in Africa, and two others, yes. Yes they do.

Then it came around to my turn and all of the angst flared up and I came out with, “I’ve had two failed relationships, one abusive. Dating someone now, for an entire year. My town has dirt streets. I have a killer view. I have three boys, including a college drop out and a felon. Oh, yeah, whoops, forgot, I’m a writer.”

Dangit, my life is good. Really good. I could have made it sound romantic and cool western, and compelling and perfect. I could have said, “I live in a one room cabin in the mountains of Colorado. I write. I travel in wild places. My kids are amazing, unique, independent and kind human beings. My community is what everyone dreams of. My boyfriend is wonderful and fun and sexy and dating while gray is fucking fabulous. I can’t imagine being anywhere else except for where I am right now.”

Which is how I always felt around these gals.

I don’t actually feel like a loser (most of the time), but what I imagine is that they all see me as one.

Part of the problem is that in 2 minutes or less, I can barely sum up one week of my life, let alone 37 years.

And their lives were linear (in general). “I graduated, got a job, got married, had kids, became successful, etc.”

L and a couple of others were more outside of the box. But not as far out as I am.

My life has not been linear in any way. It’s been more like a spirograph design: 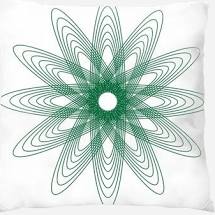 Now, let’s be clear, I am not judging their lives – lovely gals, beautiful lives, happy families, their own personal struggles, nothing for me to critique.

I am also not envious. Just utter the words “east coast” and I shudder. Same with words like, “city, suburb, country club, cubicle.”

I would have died a slow, agonizing, suffocating, death if any of those words were in my lexicon.

So, there are the folks who are still there.

There are the ones who have moved away but long for it.

And there’s me who has chosen to be here specifically because “it’s not New Jersey.”

And the rest of their lives…do I feel like I am missing out?

Some days I feel sad that I will never have a 50th wedding anniversary – because I think that’s pretty cool.

But I am not the least bit envious of all of them with their 30-year marriages. I wouldn’t trade my current relationship for any long term marriage to the same man. I love living alone.

Sometimes I wish my kids were off in college, doing that thing, but then I remind myself that children, my family, have been through so much, so many heartaches and challenges; they are badasses and incredibly decent men because of it. That’s what’s really important.”

I love the life that I have chosen even though at times it has been a disaster.

But never ever once have I ever doubted my decision to move west right out of college.

Everyone thought I’d return to the East, to a “normal” life, using my Art History degree from my fancy private college, but once I saw the big open skies that lie within the Mountain Time Zone, there was no going back.

I never actually have felt like I fit in, even now. We could spend a lot of time in therapy picking that one apart. But, I don’t like people all that much, I want to be alone, out of human contact most of the time, I’m fucking awkward. Maybe that’s why I always feel like an outsider.

I will say though, that the closest I have ever come to feeling like I belong, wholeheartedly, has been here, in this town, this county, this community.

So, I can be friends with all of these gals, because today was fun. And I actually hope to rekindle some of these relationships. But what I felt in high school remains true to this day. They are not my tribe.

My tribe is a little rougher around the edges, untamed, weird.

One thought on “KPS”